DIGITALIZATION: Keeping Your (hull) Stress and Fatigue Under Control

Yet to be mandated by the IMO or included in any SOLAS regulations, structural stress and fatigue monitoring systems have in fact been used for providing real-time safety warnings on large and specialist vessels for more than two decades. They are used to measure the impact of dynamic forces on a ship’s hull and structure to provide data that captains, and navigators can act on to ensure safe operations in practically any conditions.
There are two competing approaches to hull stress monitoring, setting ship managers and owners up with a choice between electro-mechanical systems or fiber optic technology. The latter is the basis for the SENSFIB Hull measuring system developed by Light Structures, which uses an accurate, high-level multi point monitoring technique called Fiber Bragg Grating (FBG) to deliver more precise data covering diverse local loads and global loads such as deflection, slamming, whipping and springing.

Light Structures was responsible for commercializing FBG-based hull stress sensors as a spin-off from a Norwegian Defense Association project around the turn of the century. The ambition was to provide commercial customers with access to stress and fatigue measurement data that was not only more resilient and granular than that provided by electro-mechanical systems, but was also more cost-effective due to being easier to install and having no requirements for annual recalibration. 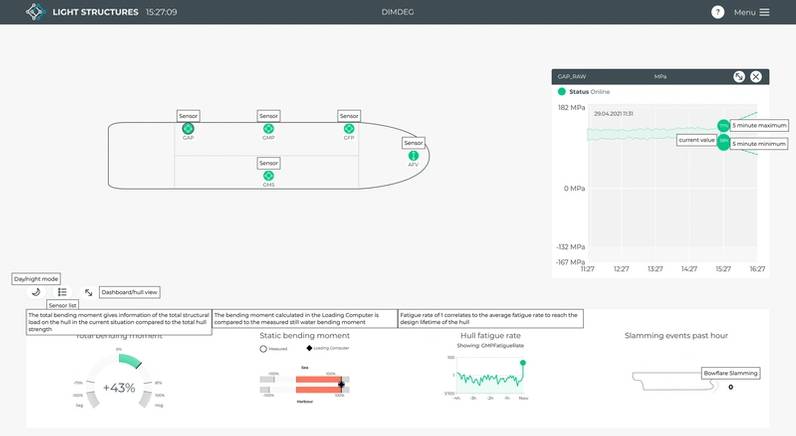 The puzzling lack of a regulatory focus on either electro-mechanical or fiber optic stress monitoring systems has meant that only vessels with very specific requirements have so far adopted the technology. Still, despite the lack of pressure from authorities, there are now more than 300 customized SENSFIB installations currently active on the largest commercial ships, oil & gas platforms, FPSOs and naval or coast guard vessels.
The hull stress data acquired via SENSFIB has undoubtedly contributed to reducing maritime casualty statistics, but as the technology and its use as an early warning system on board matures, new avenues for unlocking insight from the data are opening up, especially as maritime digitalization takes hold. Improved fatigue measurements, calculated as a result of monitored deflection and vibrations is perhaps the most advantageous of the emerging uses for structural stress data, especially when applied to verify the design numbers of expensive, one-of-a-kind vessels or to improve asset management across a large fleet of identical, or similar ships.

Comparison of actual fatigue life with design fatigue life is a standard function in SENSFIB systems. Results are normally presented based on the latest half hour of data (single point in time) with a bar graph, and the time history of the comparison implemented as an onshore function. A graphical representation of the timeline can be implemented onboard as a custom function in the SENSFIB operator station and in case there is a significant difference between the actual fatigue life and the design life, the system can provide the user with advice on the cause of this difference.
The standard function is to present the overall fatigue life calculation together with the contribution due to wave loading (included in design life) and contributions due to vibrations (not included in design life). With access to a full set of design parameters and environmental data, including wave data, it is possible to extend the advisory function to include a comparison of the actual loading conditions with the loading conditions used for design life calculations, as well as a comparison of the actual wave scatter with the design wave scatter.

To date, fatigue calculations from stress monitoring measurements have been somewhat constrained because the raw data would normally have to be hand delivered on back-up media to the shore office, and then analyzed or applied in what is essentially, an operational silo. Lower cost satellite connectivity and the deeper integration possibilities of digitalization and the Internet of Things are bringing new life to stress and fatigue monitoring data though, and nowhere is this more important than efforts to maximize operational lifetimes of multi-million-dollar maritime assets.
With online access to SENSFIB data uploaded direct from ocean going assets, Light Structures can help to verify or refute complex vessel designs on an on-going basis. Over time, this will contribute to building even safer, more effective and less costly ships and maritime assets. Further, through digitalization of SENSFIB data, it’s possible to measure fatigue across entire fleets of identical vessels in order to ascertain how certain maritime environments affect the condition of ships.

As part of a Condition Monitoring System for instance, this data could allow for preventative maintenance on stress and fatigue hotspots as well as providing a platform for improved fleet management. With the ability to measure the impact of dynamic forces in any particular region, the lifespan of vessels across an entire fleet could be improved by minimizing exposure to environments that have been measured to cause more damage to vessels. By ‘swapping out’ vessels, there is potential to spread the financial and asset life expectancy cost of operating areas with high fatigue rates, therefore reducing damage or downtime caused by fatigue across an entire fleet.

The optional SENSFIB Active Fatigue Management (AFM) system is a service that adds advanced fatigue analysis functionality to the core system, including; a rainflow counting algorithm and miner's sum calculations for calculating actual fatigue damage at sensor locations; hotspot monitoring by sensors in coldspots, by scaling measurements with Stress Concentration Factors (SCFs preferably provided by yard based on structural analyses); virtual sensors, i.e. each actual sensor is scaled with different SCFs for several nearby hotspots; life-time usage based on comparison over time between the actual fatigue life consumption and the nominal consumption for design life; separate calculations of fatigue damage due to wave-driven stresses and fatigue damage due to vibration phenomena and; low-cycle fatigue calculations to include the contribution from loading and offloading cycles. 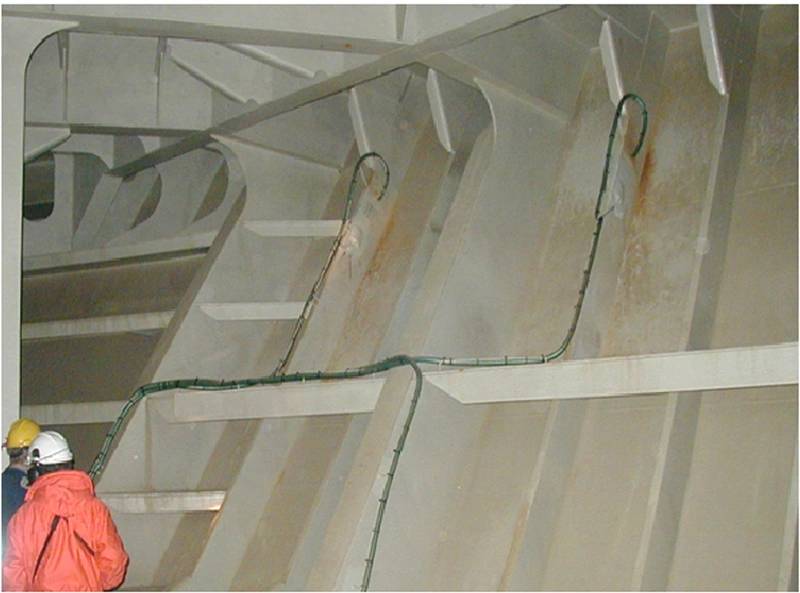 Light Structures has already developed methodologies and workflows to apply SENSFIB data for long-term fatigue measurement. The US Coast Guard’s Service Life Extension Program (SLEP) is an ideal example, where fatigue data has helped to signpost specific maintenance requirements. With data collected manually however, the complexity has made it the preserve of the particular dedicated owner or operator. It’s no surprise that an organization that is duty bound to maximize the lifespan of its assets will carry out such an undertaking then. For the rest, digitalization is making lifetime fatigue monitoring more viable due to instant access to data and the ability to analyze seemingly disparate data in a single platform, which ultimately, can provide more connected insight and even more value.

Light Structures is leveraging more connectivity with the SENSFIB Integrated Marine Monitoring System (IMMS), which combines comprehensive stress monitoring with environment monitoring parameters and advanced processing for real-time analysis of live data and theoretical models. Third party data from environmental monitoring systems, loading computers, DGPS and mooring tension measurements can be combined with data from the FBG sensors for stress and strain monitoring, as well as the motion sensors and wave spectrum analysis that make up a standard SESNSFIB installation.

This is also just the start. Light Structures’ stress and fatigue data will be used as an essential component in Digital Twins and CBM systems, and through this, the combinations of data types are practically endless. And so too is the insight that can be gained. Regulations or not, the savings enabled by extending the useable lifespan of a vessel or an entire fleet are an attractive proposition for ship owners and managers counting on digitalization to deliver operational efficiency. 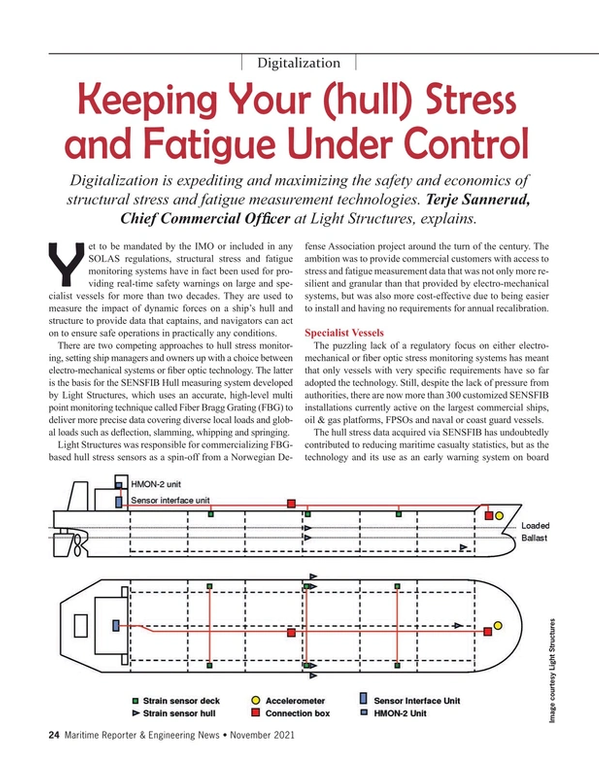 Read DIGITALIZATION: Keeping Your (hull) Stress and Fatigue Under Control in Pdf, Flash or Html5 edition of November 2021 Maritime Reporter

Other stories from November 2021 issue