Geophysical seismic surveys and port security may appear to have little in-common. However, it turns out that managing complex marine seismic operations, where 10km-long seismic streamers have to be deployed harmoniously alongside other offshore marine assets, isn’t that dissimilar to managing – and protecting – port facilities.

It's an area that ION Geophysical, more known for seismic data acquisition technology, has recently been proving its expertise in, using its Marlin system for marine operations management. Dave Gentle, Vice President of Business Development, spoke about the firm’s involvement in last year’s ANTX (Advanced Naval Technology Exercise) in the US – a project which involved detecting and managing a diverse array of assets, including potential security threats.

He says underwater threats are increasingly dynamic and diverse and therefore increasingly challenging. Gentle recalls the use of an early submarine, the Turtle, in the American revolutionary war in 1775, as an example of a new threat – and how metal hulls were a counter measure. “While threats to harbours have evolved at a slow pace, we’re now in a period where there’s a rapid advance in autonomous systems, underwater vehicles, where technology is improving and is more easily available to people around the world,” he told the Marine and Autonomous Technology Showcase event in Southampton late last year. “It’s not a giant leap to imagine these vehicles can be repurposed to make explosive devices or be used for other devious ends.” To that end, focus on naval security has increased.

Similarly, ION has been shifting its focus. While the company’s core business is seismic operations, it’s recently been looking at how its capabilities could be relevant to other markets. The idea that it could support naval assets came up within the last couple of years and resulted in ION getting in-volved in ANTX. The event is run every year by the Naval Undersea Warfare Center (NUWC) out of Newport, Rhode Island, and CNMOC (Naval Meteorology and Oceanography Command), based at Stennis, MS.

For ANTX 2019, ION proposed a joint exercise with AutoNaut, a UK based wave propelled un-manned surface vessel (USV) developer, part of the Seiche group of companies, to address the ANTX Marine Security theme. An AutoNaut USV would provide environmental monitoring and be hooked in to Marlin, ION’s marine operations management platform.

“However, as we progressed through the planning stages the CNMOC group teamed us up with Atlas Elektronik, who provided the Cerberus Diver Detection Sonar, and Marine Arresting Technol-ogies, who have a non-lethal counter measure device in the form of their Stingray capture net,” says Gentle. “This then became an exercise in integrating all of the separate systems into a port security solution.” 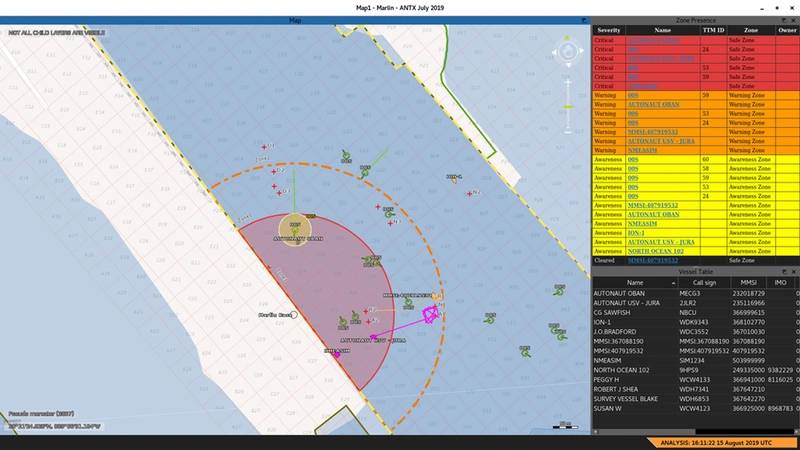 Marlin Screenshot showing the port area with zones of operation setup around the shore-side stations and target of interest (diver) being tracked moving towards the safe zone this shows the targets within those zones top left (red is safe zone, orange ops zone, and yellow is monitored zone). Image from ION.

Marlin is a rule-based software solution for operations management. It combines temporal planning with spatial awareness, primarily using real-time ships’ AIS (automatic identification system), as well as radar and other tracked target feeds to improve operational efficiency.
ION has been using Marlin and other command and control software platforms for more than three decades in the offshore oil and gas industry. There, it’s mostly used in managing seismic survey operations, involving towed streamer surveys comprising up to 14 hydrophone arrays each reaching up to 10km long or seabed surveys with multiple surface vessels and assets deployed on the seafloor.

“In later years, we found that, as these surveys were increasingly needed around and in the middle of busy offshore oilfields, the seismic survey operations were in conflict with other oilfield operations,” says Gentle. “At this point we turned our attention to simultaneous operations management (simops) enabling the seismic surveys and the oilfield operations to run in harmony with each other and avoiding costly downtime.” Marlin could marry the operational plans with a powerul geographic information system (GIS) engine with built-in archiving and look-forward analysis – helping to prevent asset conflicts.

For the ANTX exercises, ION wanted to demonstrate that it could integrate third-party systems quickly into Marlin and then use it to provide the necessary information to enable decision optimization in port security scenarios. This is what it got to do during the CNMOC exercises, which were also supported by the University of Southern Mississippi at their Marine Research Center at the Port of Gulfport.

During a week-long exercise, ION was tasked with working with AutoNaut, Atlas Electronik and Marine Arresting Technologies to provide an integrated system that would detect surface and underwater threats and coordinate a non-lethal mitigation against them. The threats were divers (real and mechanical/dummy) and unmanned underwater vehicles (UUVs), including Remus and Rip-tide UUVs. Atlas Electronik’s Cerberus was used to detect the threats, while their SeaFox fiber op-tic guided mine countermeasure tool was used to intercept and inspect them and a Stingray capture net from Marine Arresting Technologies from Florida was also deployed. Approximately 20 people from companies and Navy groups took part. A CONOPS (concept of operations) plan was decided and setup in Marlin which also monitored assets and threats in the operations zones. 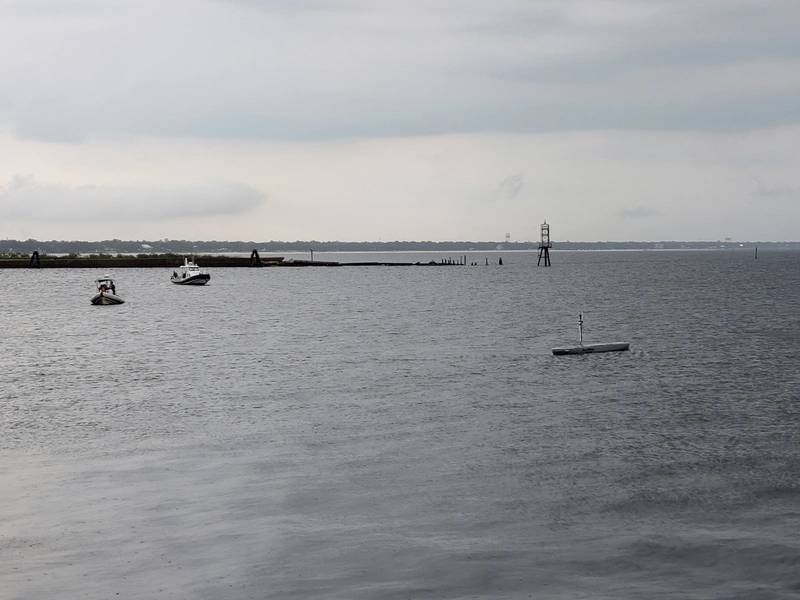 The ANTX “playground”. Image from ION.

The idea was to have a diver or UUV enter the area and make their way to the controlled zone. There, Cerberus, mounted off a dock, would pick them up, which Marlin would then see, track and predict when and where the diver would go and send the SeaFox to investigate. The exercise then presumed that the diver/UUV would continue to move into the controlled zone, so then the Sting-ray net would be deployed, on this occasion from the Port Police Patrol boat. AIS transmitters were used to track ‘friendly’ assets. But, because the update rates during the exercise were slow, ION switched to using GPS tracking, where it was available, through some “on the fly” integration.

“There was a silty bottom (in the area) and high turbidity,” said Gentle, “the conditions were challenging. But the system detected real and dummy divers. Atlas Elektronik’s SeaFox was used to investigate the intruders and we also used the Stringray net to capture the Remus 100 and Rip-tide.” All of this was coordinated through Marlin, with the AutoNaut USV being used as a communications gateway to the UUVs, with control via a Woods Hole Oceanographic Institute Acomm unit. In addition, the AutoNaut also collected a metocean dataset, which offered some additional interesting data to analyze.

“We were able to do this very quickly during the exercise, leaning on our decades of sensor and data fusion experience in the oil and gas industry,” says Gentle. “The end result is that the team were able to successfully detect threats, monitor their tracks and deploy countermeasures, all coordinated through Marlin.”

“For this exercise, Seiche’s engineers built a prototype PAM (passive acoustic monitoring) array that was housed on the AutoNaut USV,” says Gentle. “As AutoNaut is capable of very quiet wave propulsion and is able to maintain station and listen as we performed the port security operations, they picked up some very interesting results in later post processing.”

It seems there’s more to come, and not just from ION. “Underwater security threat detection and mitigation still has a number of challenges to solve in order to provide a seamless and reliable solution to the growing potential threats that are out there,” says Gentle. “A number of companies are working on this area and ION hope to be able to contribute using the Marlin platform as the glue to tie it all together.”

ION specifically is doing more work in this area, including providing a Marlin variant, called Marlin SmartPort, in ports for vessel tracking and port operations management. “This is a fairly new area for us, but we are gaining traction working with our partners at the Port of Montrose (in the UK) and we working with AWS on this cloud native version of the Marlin platform,” says Gentle. 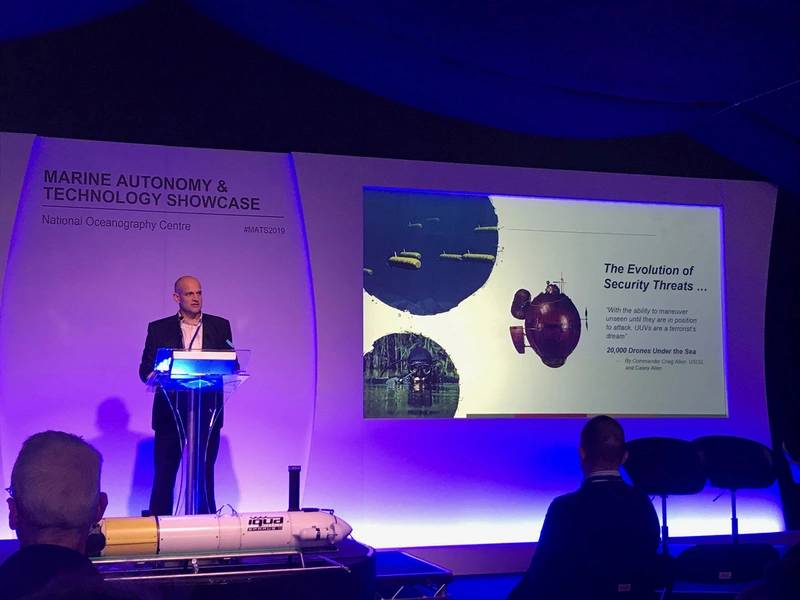 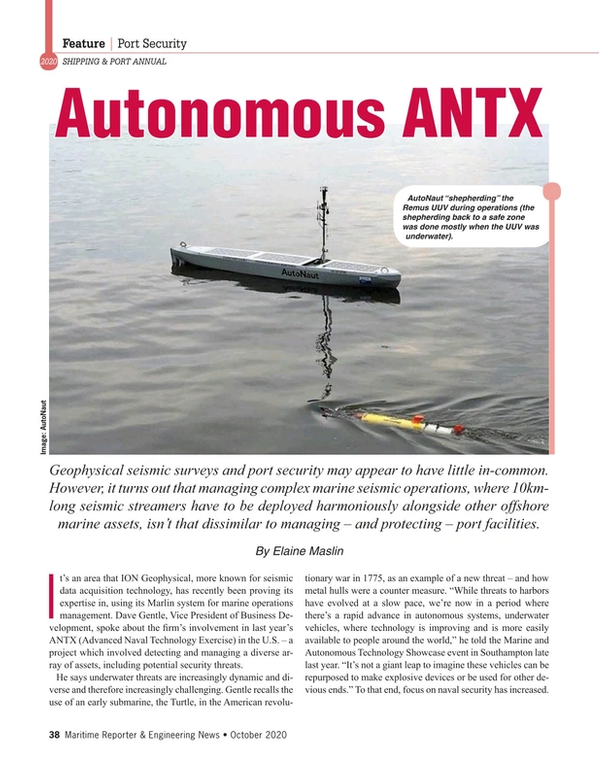 Other stories from October 2020 issue