Safely Navigating the Winds of Change

The first-in-the-nation offshore wind training facility will be located at the Massachusetts Maritime Academy.

In late October, with much fanfare, Massachusetts Governor Charlie Baker, Stephen Pike, CEO of the Massachusetts Clean Energy Center and many others joined officials from the Massachusetts Maritime Academy (MMA) to launch the first-in-the-nation offshore wind crew transfer training facility. The group of state and college representatives also officially christened a new training vessel. The event underscored the efforts at MMA to both support, but also take full advantage of what stakeholders believe is the advent of offshore wind here in the United States.

The training facility, which received a total of $1.73 million from the Administration and Massachusetts Clean Energy Center (MassCEC), will provide education, training and certification to thousands of residents, including Mass Maritime cadets, as well as skilled labor including electricians, pile drivers, divers and welders, enabling them to work in the emerging offshore wind industry. But, it is important to note that this isn’t intended to be the traditional ‘mariner’ training that the storied Buzzards Bay campus has become known for. Instead, the fledgling effort is nod to the new skill sets and trades which will be need in the offshore energy sectors in the decades to come. Most of those workers won’t be trained mariners.

For starters, the training facility represents an investment by the Commonwealth to grow a workforce for the offshore wind industry, which will support the construction and operation of Vineyard Wind’s 800-megawatt project, which was selected by the Commonwealth’s Electric District Companies in May 2018 under the state’s first competitive procurement for offshore wind. Eventually, it hopes to support training for myriad projects from coast-to-coast.

The project, a partnership between Mass Maritime, state government and industry, heralds the first domestic training facility accredited to provide a full safety training program required for workers in offshore wind. The offshore wind training facility will provide critical infrastructure that will give both college students and adults seeking new careers the necessary skills and certification to work in the emerging industry.

In total, MMA received more than $1.73 million in grants from the Baker-Polito Administration and MassCEC to support the development of its first-in-the-nation facility and basic safety program. In a nutshell, the crew transfer training facility is a critical component of a comprehensive safety training program to be offered by Mass Maritime. The facility supports safety training for workers moving from relatively small crew transfer vessels to the fixed support structures of wind turbines in the open seas.

Safety first
Initially, MMA will focus on Basic Safety Training for the offshore wind industry with a course comprised of five modules: First Aid, Manual Handling, Fire Awareness, Working at Heights, and Sea Survival. Some of the training will take place in MMA’s newly constructed indoor climbing facility and on the Crew Transfer Training Facility located on the MMA’s pier in Buzzard’s Bay. Instructors will teach students how to safely transfer from the vessel to an offshore wind turbine. MMA partnered with the largest provider of GWO training in the world, Relyon Nutec, to help train MMA instructors to deliver these courses using GWO-approved and globally recognized curriculum.

The new jobs anticipated to support the offshore wind industry include a wide range of types, including engineers, trade workers, surveyors, scientists, technicians, managers and seafarers. In fact, the role of the wind turbine technician has been one of the fastest growing occupations in the United States in recent years. All that said, as skilled as these personnel might be at their core missions, most know little to nothing about maritime protocols and safety. That’s where MMA comes in. 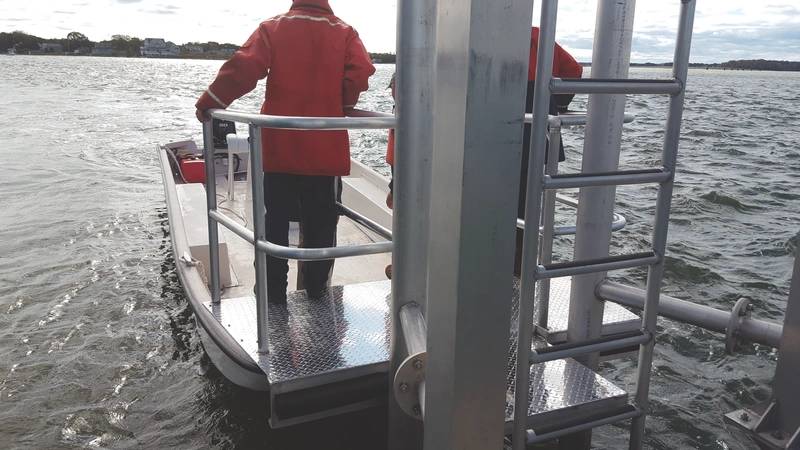 The Offshore Wind Jobs and Opportunity Act (the Job Act), introduced this year and now pending in Congress would provide up to $25 million in federal grants to colleges, unions, and nonprofits to prepare “a new generation of offshore wind workers.” 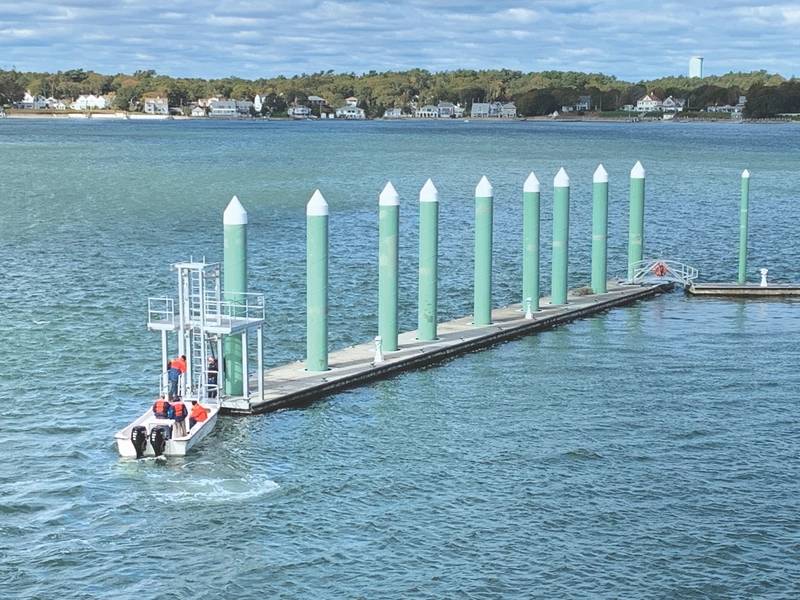 Offshore wind farm training for seafarers
The academy’s newest training vessel is a basic twin engine Carolina skiff with some modifications to the bow to allow simulated approaches to an offshore wind turbine. In essence, it looks similar to what you might find on a crew transfer vessel, just on a smaller scale. In addition to that, and leveraging some of the funds received from the Clean Energy Center, MMA constructed an additional pier which will serve as additional infrastructure for the rapidly developing crew transfer training facility.

Captain Michael Burns, Director of MMA’s Center for Maritime and Professional Training, explained, “That’s an aluminum structure that sits out on the end of the pier – it’s bolted to the pier – and it simulates the transition piece of an offshore wind turbine. In other words, there are heavy fender rails that the boat will push up against and then a recessed ladder that leads up to a platform about eight feet above the deck of the float. Students will practice and learn how to safely transfer to and from the vessel.”

That part of the course involves “Sea Survival,” and it’s just one of five modules that make up basic safety training for the offshore wind industry. The Global Wind Organization (GWO) is the international organization that developed this curriculum. Many offshore wind companies now mandate use of training standards developed by GWO, which a non-profit founded by wind turbine manufacturers and operators. GWO training courses must be taught by GWO-certified training providers.

At Mass. Maritime, the maximum class size will be 12, and Burns says that the school hopes to train as many as 250 wind professionals annually. The entire basic safety program will span six days, involving five modules and is intended to be about 80% practical training with the balance in a classroom. That, says Burns, lends itself well to the assessment-based training that the school already imbeds into its curriculum. And, while this training regimen has nothing formally to do with tradition IMO-mandated STCW training, there are parallels to STCW where the interests of maritime safety intersect with the rapidly emerging non-traditional work roles that offshore wind demands. 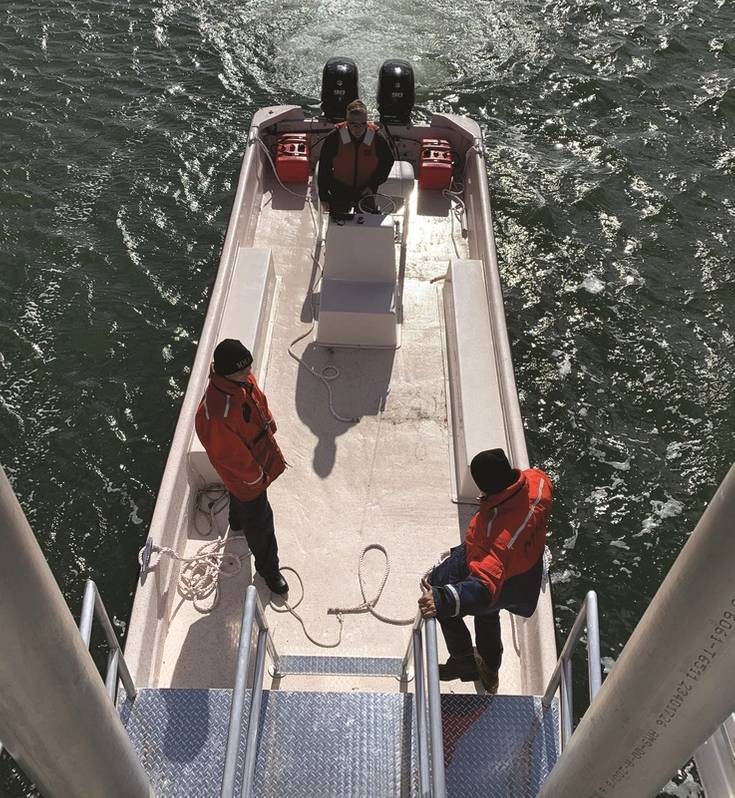 The winds of change
The U.S. Department of Energy estimates 43,000 new jobs will be created in the offshore wind market by 2030. The Massachusetts Clean Energy Center recently published an assessment of jobs and economic impacts associated with development of 1,600 megawatts in Massachusetts alone. That study estimated that over the next decade, offshore wind farms will create as many as 3,000 jobs and generate economic impact that could reach $2 billion regionally.

As the U.S. offshore wind industry grows, multiple projects are in the development stages off of the Atlantic coast. Eventually, the total megawatt capacity of U.S. offshore wind farms is anticipated to reach 22,000 by 2030 and 43,000 by 2050. But, not if there aren’t sufficient numbers of trained personnel to make that happen.

Before any of it can come to fruition, ensuring a safe offshore workplace will be ‘job one.’ That’s not a new idea, but for the thousands of previously land based personnel being mobilized to meet future offshore technical demands, it is critically important. Out in front of that effort, Mass Maritime is once again rising to the challenge. 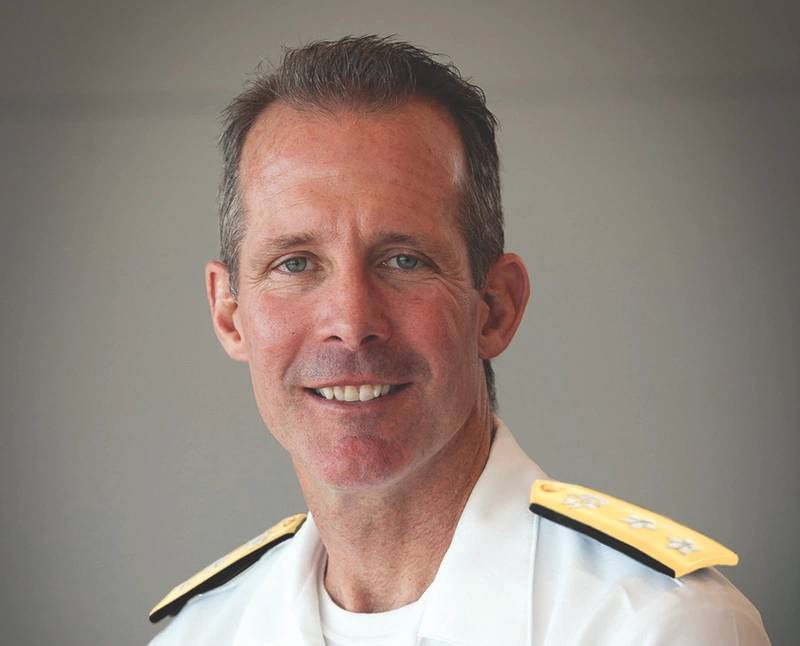 The evolving role of the nation’s maritime academies is destined to meet the changing realities of the domestic waterfront. For example, a 1970s era MMA graduate therefore might be surprised to learn what the academy has become, and all in just a few short decades. On the other hand, no one will be surprised to see what comes next. The changing offshore winds will see to that. 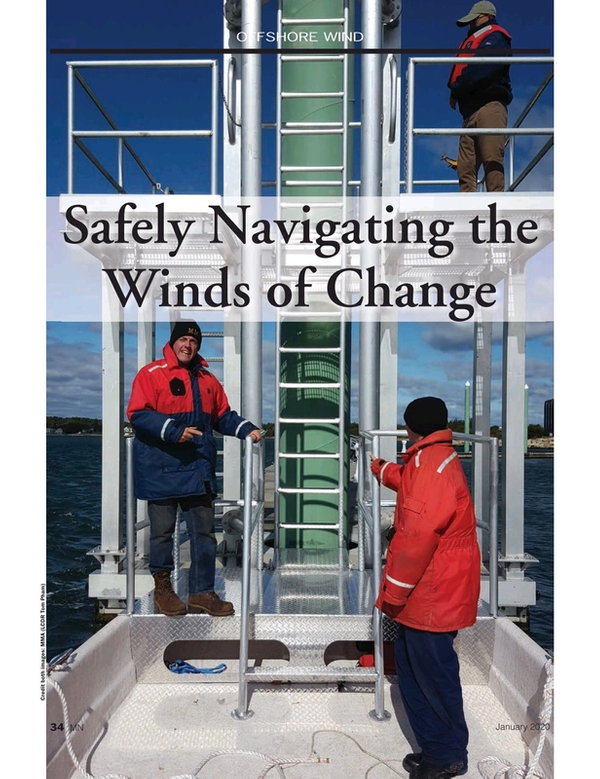 Other stories from January 2020 issue

Marine News is the premier magazine of the North American Inland, coastal and Offshore workboat markets.